Exploring browser options in the modern era of the web

I've made my gripes with the modern web pretty well known here on more than one occasion. When I first started using the web in the (very) late 90's and early 2000's I like many people used the default browser installed along with Windows at the time: Internet Explorer. It wasn't until I started learning more about computers and software that I became more aware of different browser options and switched over to Firefox somewhere around 2005. Besides a brief stint on Chrome in the early 2010's (I think I may also have briefly used Safari when there was a Windows version for a little while, anybody remember that?), I have pretty strictly stuck to Free (or at the very least Open Source) web browsers.

For just over 2 years now I've been using Seamonkey as my main web browser and e-mail client. Seamonkey is descended from Netscape and still uses basically the same UI from those days. It also still uses the old Firefox addon system, which I prefer over webextensions. Something that bothers me about a lot of software in general is the constantly changing UI layouts and breaking compatibility with your configurations and addons.

However although it's still maintained, it is done so by a small team and I've noticed it's compatibility with the modern web is waning. I felt it was to to re-evaluate my choice in browser. I've become more accustomed to terminal and keyboard-driven Vim-like applications for a while now. I've even taken to using W3M (a terminal web browser) to sometimes browse websites that don't rely on Javascript in the terminal. It's also what I use to browse Gopher and Gemini (via a web proxy), so I've become quite accustomed to a keyboard driven browser.

Because of this I've had my eye on Qutebrowser for a while now, so I decided to give it a shot recently. After configuring to my liking and using it for a while I've got to say, there's a lot to like about Qutebrowser. The interface is incredibly minimal since the browser is keyboard driven which I like. The ability to plug bash scripts and external programs into it in such a configurable way is a very welcome feature. Nowadays I watch Youtube videos almost exclusively through mpv by either streaming or downloading with youtube-dl (the yt-dlp fork to be exact), so the ability to open a Youtube (or other video host) link quickly and easily with a few short key presses is great. I've also been using Surfraw for bookmarks and search engines for a while and Qutebrowser allows me to configure it to be easily accessible from the browser itself with a custom script, which is very cool. The fact that Qutebrowser is a small community browser project is also something I really want to support. 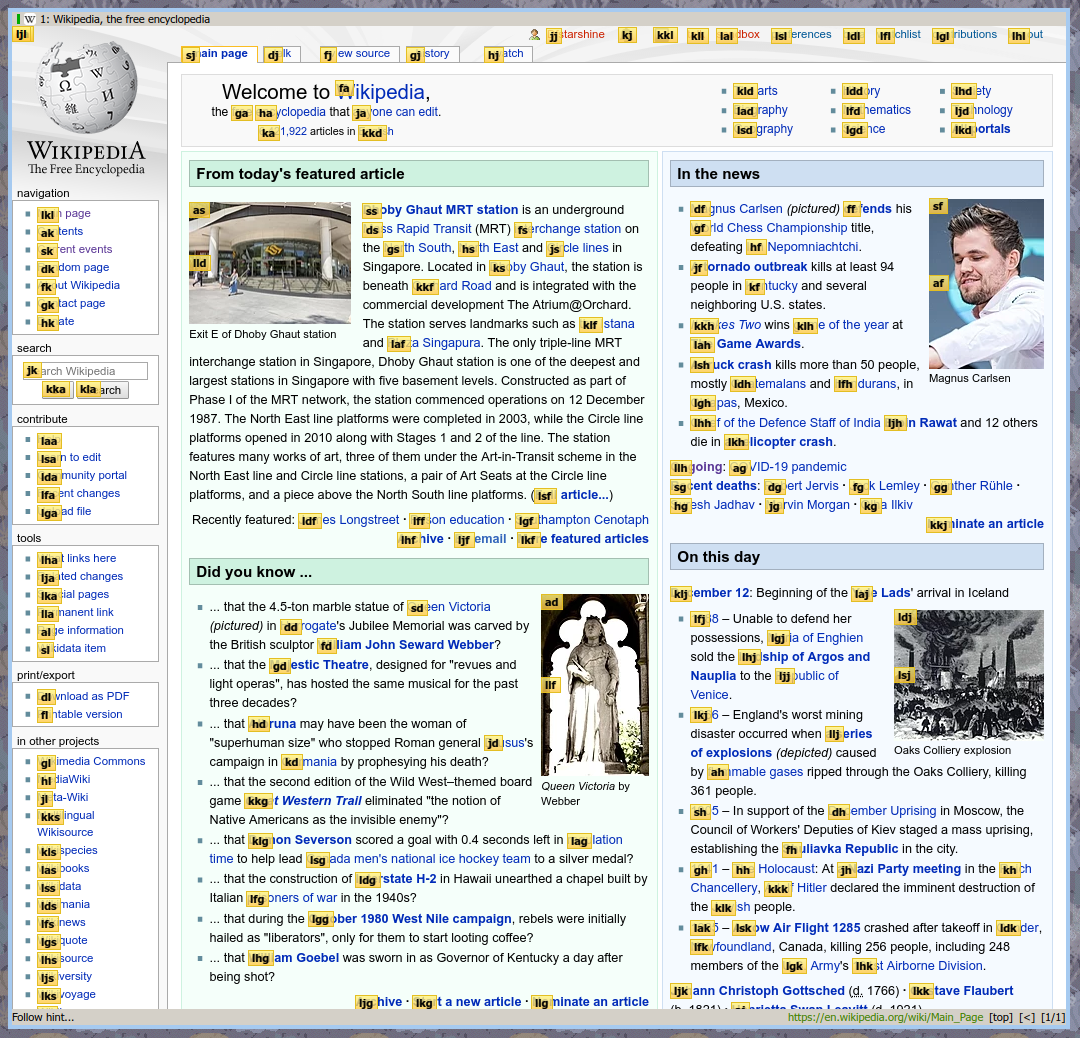 I kinda fell in love with Qutebrowser and I would love to use it as my main browser, if it wasn't for one major deal breaker: Adblocking support. The modern web is a nightmare for a lot of different reasons, one of which is ads. Quite frankly I cannot tolerate the web without having a decent Adblocker and I've become very used to seeing basically no ads on the web for a number of years at this point, it's always been the first thing I setup when I install a new browser. Qutebrowser has a built in adblocker of sorts, but it's not exactly perfect, I found a lot of stuff got through the cracks, many times I was on a page where the ad itself was blocked, but the massive space where the ad would be remains. If you still watch Youtube videos through the site itself then the ads won't be blocked at all. Unlike addons like uBlock Origin, Qutebrowsers adblocker also doesn't have the ability to block other web annoyances such as GDPR cookie consent pop-ups. It's just an inferior adblocker and since Qutebrowser doesn't have addon support you can't just install something like uBlock Origin on it.

There are a few other minor downsides to Qutebrowser, such as lacking a built in readability mode or way of detecting rss feeds, although you can easily create scripts to get both those functionalities. Qutebrowser does have it's own Greasemonkey implementation built in, but no way of having custom per-site css rules that browser addons like Stylus provide. Those are pretty minor downsides that I can live with pretty easily, but sadly I can't really get past the sub-par adblocking.

There is another point of contention with Qutebrowser for some (which isn't really the fault of the browser itself) which is the fact that it uses QtWebEngine, which is an "un-googled" version of the Blink rendering engine. It can be argued that by using Google's engine you are helping to solidify their control over the web and that we should be backing Mozilla's engine instead. I've gotta admit that the thought of complaining about the state of the web while using a Chrome-based browser does make me feel a little dirty (not in a good way). However the simple fact is that community browser projects are given very little options if they want their browser to be compatible with the modern web since Firefox's engine is not feasible to implement into a project like Qutebrowser right now. It should be mentioned though that Qutebrowser does give you the option of using Webkit as the engine instead.

I will keep my eye on the development of Qutebrowser and if some of the downsides are addressed in the future I will switch to it as my main browser in a shot, I really like it. In the meantime, I've decided to switch back to Firefox. I've tried to configure Firefox to be as close as I can get to Qutebrowser, while searching for addons that add the same Vim-like keybinds as Qutebrowser to Firefox I found Tridactyl. It not only adds the Qutebrowser style hotkeys and interface to Firefox, it can be configured from a config file in my home directory, which is really cool. The best part is that like Qutebrowser, I can also plug bash scripts into it in a similar way. One downside is that the limitations of Firefox's newer WebExtensions addon system do hold it back somewhat. Tridactyl won't load in Firefox's own internal Settings, about pages or error pages which is a bit of a pain. While this doesn't seem to get in the way too often it is in many ways an inferior experience to something like Qutebrowser. For the time being it is a worthwhile compromise to have a browser with proper adblocking, plus I don't have the ethical dilemma of using a Chrome-based rendering engine. Besides Tridactyl I've also got some custom userchrome css configured that attempts to replicate the minimal interface of Qutebrowser. The result is a Firefox configuration that gets it about 70% of the way to working exactly like Qutebrowser. That being said I really wish I could just use Qutebrowser or another similar browser instead and I am going to keep my options open. 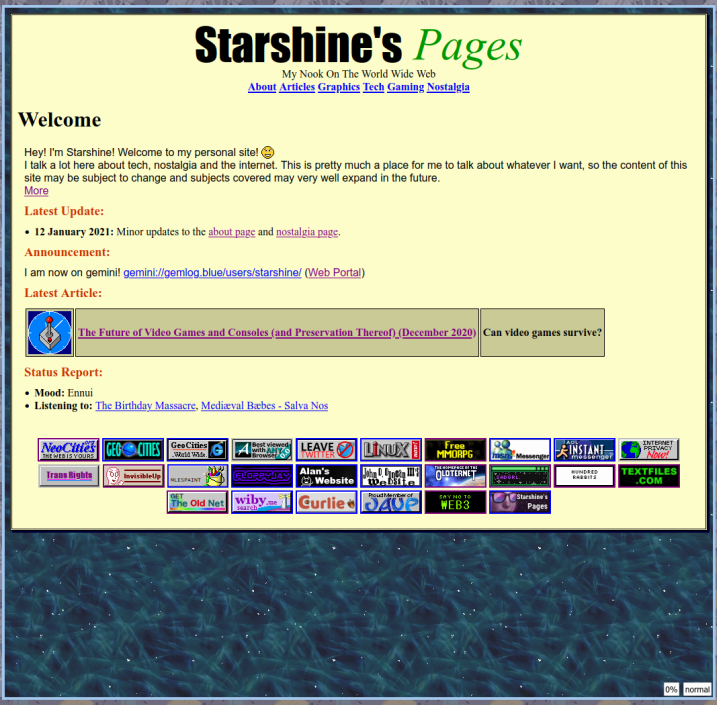 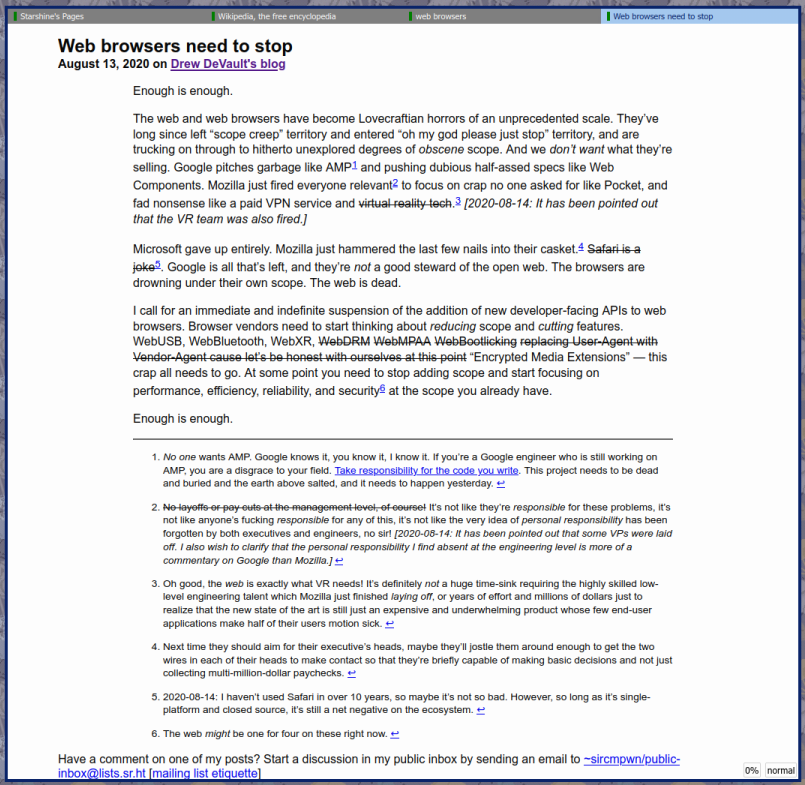 It's a sad state of affairs that the web is at a point where software like uBlock Origin and features like "readability mode" are even required, but sadly that's the world we live in. I really don't think features like Ad-blocking or per-site css should be the job of add-ons at all, such features should be a standard feature of the browser itself. I think part of the solution is probably just trying to use the web less (since it's only going to get worse) and retreating into alternative spaces like Gopher and Gemini. I miss the days of better Browser choices, multiple rendering engines and simpler websites.

As I've been using SeaMonkey for my main browser I've had an install of Chromium as a secondary browser that I use for anything important I may need to do through the web and don't want to run into issues. Such as my three monthly appointments over Google Meet that I need to have related to my trans healthcare or filling out important forms. I'm going to keep doing this even though I'm now using a browser that much more compatible with the modern web. As much as I dislike this fact, I'm pretty much of the opinion at this point that Firefox (and other non-blink/webkit browsers) is to the web what Wine is to Windows applications. Firefox's compatibility with the modern web might be good, but it's really designed to work with Google Chrome. God that's depressing.