Alternatives To The Modern Web

Back in February I wrote an article about my problems with the modern web. I was never too happy with that article, to the point of considering re-doing it multiple times. News broke a few months ago that Mozilla is laying off a bunch of employees. I've been seeing a bunch of discussion about it on Mastodon with people discussing the future of the web and Google's strangle hold on it. It is a fact that not only is Google Chrome the most popular browser, but that the vast majority of browsers these days are using Chrome's Blink rendering engine, Google's fork of Webkit. Slowly browser developers have given up on their own rendering engines in favour of Google's: Opera had Presto, Microsoft had Trident in Internet Explorer and then EdgeHTML for Edge but has now rebuilt Edge as a Chrome-based browser. The only widely-used non-Blink browsers left are Firefox which uses Gecko and Safari which as of writing still uses Webkit.

So Google has a massive influence on web standards and it's growing all the time. The web has become a bloated mess, expanded well beyond it's intended purpose that creating or maintaining a secure and compatible engine to run on it has become almost a bigger undertaking than an operating system. We went from an online document viewer to an entire application platform, what happened? Something has clearly gone wrong here.

In light of the current state of the web many people have decided it's time to give up on it and are retreating into alternative protocols, most notibly Gopher and Gemini, to build an alternative space on the internet known as "The Small Internet" or "The Slow Internet". I've taken a keen interest in these protocols in recent months after becoming quite pessimistic over the future of the web myself.

Gopher dates back to 1991 as an alternative to the early web which as we now know, won out in terms of mainstream usage. Gopher is entirely menu-driven and text-based. Gemini takes the Gopher idea, adds some new features and improvements and makes it easier to host a server. Many (myself included) like their simplicity, they are well suited to a terminal based client (although graphical clients exist) and have an almost BBS-like experience. The feature-limted nature of the protocols means they are more resistent to the issues the modern web has succumbed to. No tracking cookies, no javascript, no libraries, no cryptocurrency miners and no invasive ads (or ads in general really). However that also means no embedded images, videos or Limp Bizkit MIDIs and no CSS, though it is still possible to host files and link to pages/files hosted on the web. 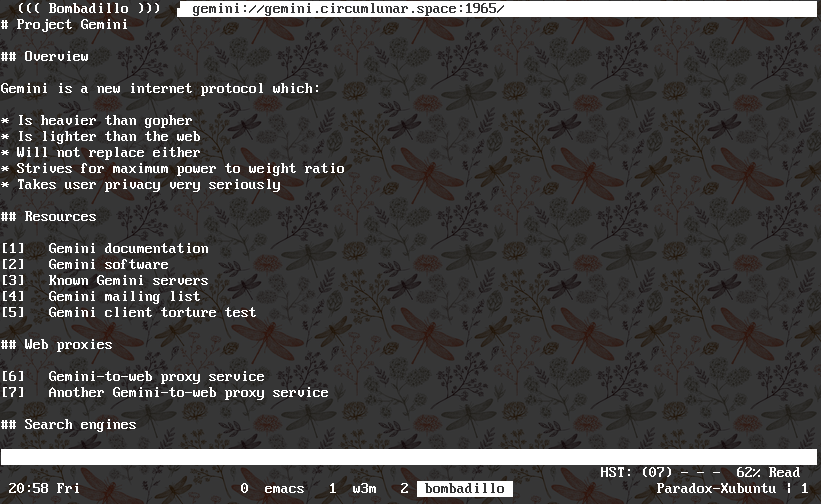 There is a niche but growing community, so there is no shortage of "Gopherholes" or "Gemspaces" to explore. It does make me happy to see that there is a growing alternative space on the internet outside of the web, especially one that is so simple and minimalist. This not only makes it a refreshing alternative to the bloated distraction-driven web but it's also more friendly to lower-end hardware and able to be interacted with a number of ways, be it through the command-line or GUI.

However as frustrated as I am with the state of the web, there is part of me that can't help but think it's a mistake to just give up on the web all-together. After all, it's not all bad, there is an alternative side of the web that exists partially here on Neocities and elsewhere. There is no denying though that Google/Chrome/Blink is fast taking over the web and our only real non-blink browser engine looks to be in danger and it's only going to get harder and harder to keep up the pace of maintaining a browser engine, especially without the kind of resources Google has. Building and maintaining a community-made web browser engine just isn't feisible anymore without a massive amount of collaberation rivaling that of the Linux kernel.

I really don't know if there is any solution to rein in the web and Google's control over it. Is the web just doomed to spiral further and further into a bloated corperate mess of javascript libraries, ads and tracking? I don't think its realistic to think that Gopher and Gemini will ever acheive widespread adoption and will probably always be niche, but maybe that's how it should be? Maybe instead of having one big solution to replace the web, we can instead have lots of smaller ones? Part of the issue with the web and the internet in general is how centralised everything has become, we have these few really big sites ran be huge companies. I've thought for a while that instead the web needs to have lots of smaller community-run websites instead, so maybe the same is true for protocols in general? We can have Gopher, we can have Gemini, we can have an alternative side of the web and we can have whatever other protocols people create/adopt next and they can all exist and all be somewhat niche. Even if they're small, having more spaces ran by people rather than companies is always an improvement in my opinion.

As of writing I don't have a Gopherhole or Gemspace of my own, but I may well look into getting one set up at some point (shame Neocities dosen't allow for this), so watch this space.

Some better articles/videos on this subject

Introduction to Gemini and the Small Internet

All Our Selves In One Basket