My Problem With The Modern Web

As I've mentioned before, I first got internet access around 2000/2001. Since that time (and indeed the earlyer web days in the 90s that I've since learned more about) things have inevitibly changed... 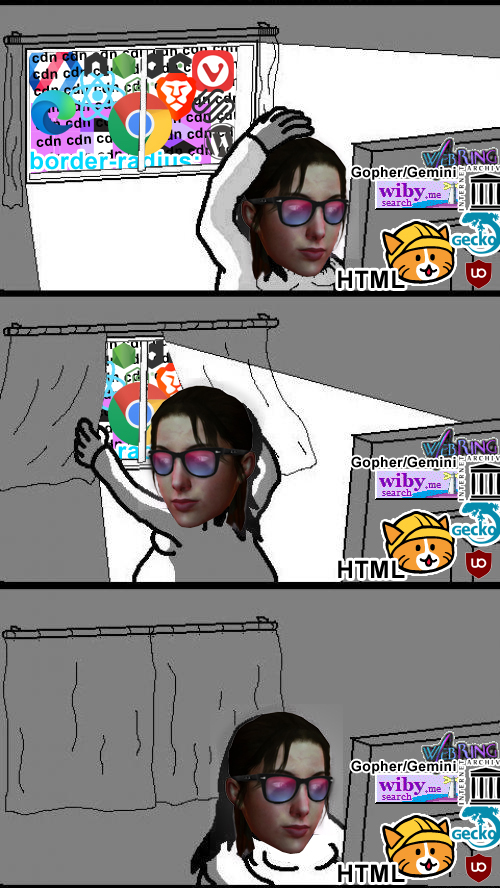 Last week I was browsing Youtube when a blue bar appeared at the top of the page telling me "This version of YouTube is going away soon" and urging me to switch to the new version. After investigating it turns out that "soon" will be March, by which point we'll be forced to use the new terrable bloated layout. Oh boy, here we go. (Update: It is currently May 2020 and the old layout is still available, not sure why but I'll take it). So in 2017 Youtube introduced a new layout that uses Polymer, a JavaScript library. However it's still been possible to continue using the old layout. There's a few different reasons why you would want to do this: For one, it's been a pretty common concensus that every time Youtube's had a major re-design its sucked compaired to the old version and this latest version is no exception, it improves virtually nothing, has a ton of wasted space because everything has been made bigger and spread out on the page and to top it off, it's noticably slower than the old version, especially if you're using a non-chrome-based browser. This new layout just seems to be a more bloated and visually oversized version of the old one. Presumably the old layout was kept around for compatibility and accessibility reasons, but I guess those things aren't important anymore?

It's hardly surprising though, looking at the current trends on the web in general: Exessive Javascript, an abundance of CSS animations, CDNs upon CDNs, trackers, content obscured by popup banners, wasted space and so... so much border radius and padding. Once you start using browser Add-Ons like Noscript or uMatrix you start to realise pretty quickly how heavily a website, often one that really needs to be nothing more than pure HTML and CSS, relies on Javascript. There has been so many times I've been reading an article and the images won't show up, because it needs Javascript to load them. Javascript... to load an image. Sometimes you'll open a page and it's simply blank, it needs Javascript to even load the contents of the page. Why? These sites aren't doing anything special that simply can't be done with pure HTML. So why such heavy reliance on Javascript to do basic things that are simply built into HTML? It uses up bandwidth and system resources for both the user and the host. What's the point in having more and more powerful devices to surf the web with if we're just going to hog their resources with bloated terrable websites?

The web is described by the first web page, created by CERN in 1992 as "a wide-area hypermedia information retrieval initiative aiming to give universal access to a large universe of documents". "Large universe of documents", this is what the World Wide Web was originally meant to be, HTML documents that can be fetched remotely and viewed, linking to others by hyperlinks. The interconnected document aprouch to the web seems to have changed somewhere along the way and now web pages can, in the case of "Web Apps", be considered software in and of themselves, with the browser now as a sort of cross-platform environment that these programs can be run in. While this isn't necessarily bad, technologies can evolve beyond their originally envisioned purpose and I think web apps have their place, but this "webpage as software" approach seems to be leaking over into places where it's completely unnecessary. A news article for example is basicly just a document, with text, images and maybe some hyperlinks. That's all it really needs to be, exactly the purpose HTML was supposed to fulfill, perhaps with some CSS to pretty it up a little. Why is it then that on the modern web, 9 times out of 10, if a user has Javascript disabled it often breaks the entire page? Why can't a news article simply be a document, a small lightweight file that presents the information that it needs to? You wouldn't add a bunch of scripts to a Word document or PDF would you? 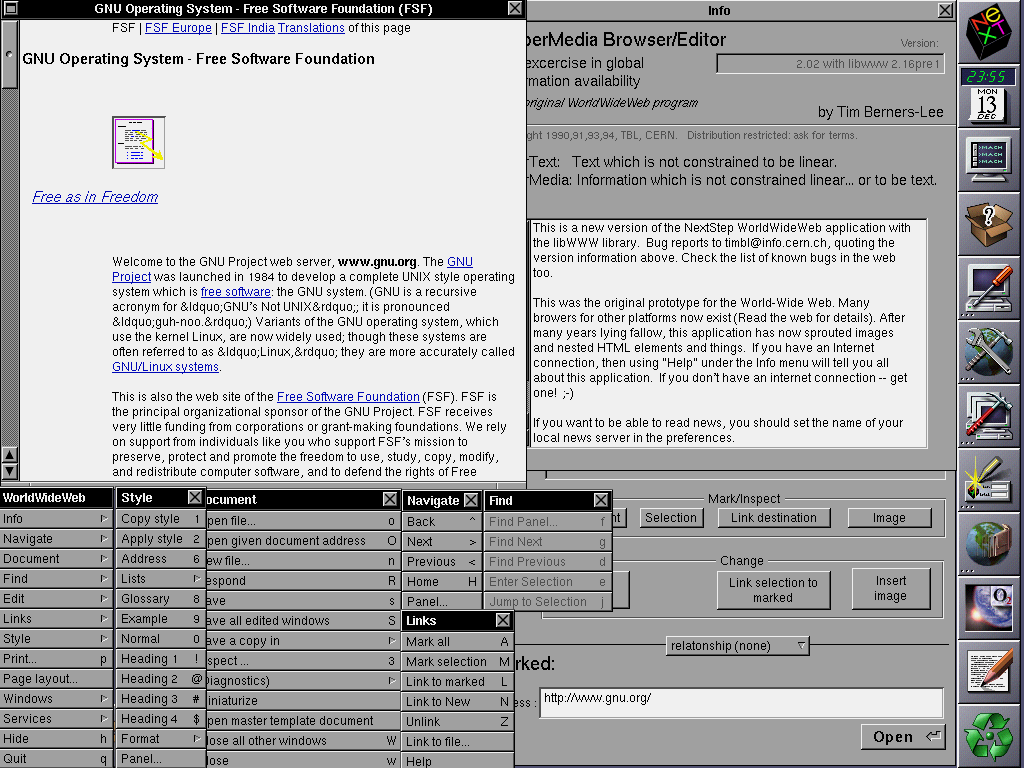 What is worse to me though than the technical bloat of the modern web, is the sense that something magical from those early days has been lost. The early web was more colourful and diverse, with sites created by people who didn't abide by strict guidelines of what a website should look like. Personal sites had a sort of scrapbook quality to them. There was a community of people who shared GIFs and signed guestbooks. It was a world of webrings and 88x31 badges linking to eachothers sites, A world that many of us are now trying to replicate and revive here on Neocities. Now "professional" web design is the be-all and end-all of web sites. Web designers who have always believed ever since the hayday of Geocities that amateur web sites shouldn't exist, have now managed to convince us that only professional web designers should be making web sites. The free expression and creativity of those early web days has been dumped into the "hilariously awful" pile of history, along with the ugly sweaters and out of fashon hairstyles you had as a teenager. An embarrassing and immature part of web history that we should look back at and make fun of, because now we know better, just leave web design to the professionals please. 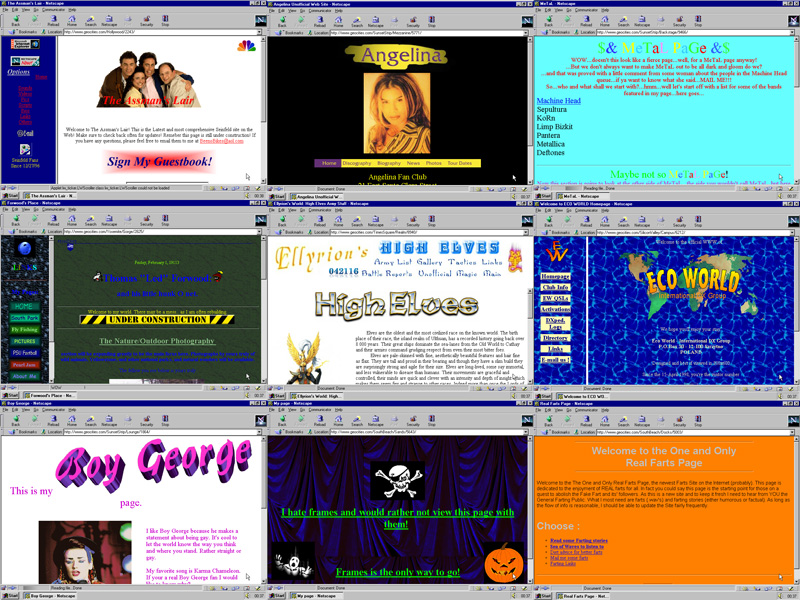 Many of the Geocities-era web page creators probably didn't even know HTML and likely used programs like NetObjects or Dreamweaver to help them create their sites. The non-tech-savvy couldn't begin to create a passably "professional" looking site using such programs today and are instead pushed to use the cookie-cutter templates provided by such companies as Squarespace, or just make a Facebook page instead. The end result is a clean, sterilised web with sites that all look the same. No more glitter text, no more dancing baby GIFs and no more X-Files MIDIs. Instead you get plenty of white (with the occasional dark mode), rounded edges, drop shadows, smooth animations and have your links tucked away inside hamburger menus.

I'm not saying that web design shouldn't evolve and of course there is an important place for professional, polished websites, but there is also a place for the personal community spirit Geocities-style web. Yes, some of those old Geocities sites or customized Myspace pages could be hard to deal with sometimes, they could hurt your eyes (and potentially your ears with their auto-playing music), but I would still rather have that web than one that is an endless sea of the same soulless high-design Squarespace and Wordpress templates. The 90s and early 2000s was a time where web design was very new even to the professionals and perhaps if normal "netizens" had been encoraged to keep making websites the quality of their sites would have evolved beyond the early-web/Geocities style while maintaining the community spirit and creative expression that is so rare on the current web. I want a web that people are encouraged to take part in, not one were they are pushed out by "web designers" who get the privilege of deciding what it should look like. I don't think your creative flair on your web presence should be regulated to the strict boundries of a circular profile picture and a top banner image. I think the dismissal of those early amateur web pages for their abundant colours and assortment of gifs comes from an elitist idea of objective good taste thats making the web a very boring and uninspiring place.

Some good links on this subject

404 Page Not Found - An article by Kate Wagner

CO2 emissions on the web - on Danny van Kooten's blog

Against an Increasingly User-Hostile Web - An article by Parimal Satyal

The Bullshit Web - An article by Nick Heer

Why isn't the internet more fun and weird? - on Jarred's codeblog

30 years on, what’s next #ForTheWeb? - from World Wide Web Foundation

Making the Web Fun Again - On The Neocities Blog

I hope this article wasn't too rambly, I spent a long time writing this one trying to get it right. There are a few aspects of this topic I wish I could have covered such as Ads, privacy issues, Google and the fact that almost all browsers nowadays are using their browser engine and the effect this is having and will have for the future of the web. However I hopefully managed to convey the bulk of my point. Thank you for reading. I will say though that many of the articles linked above do a much better job of explaining this issue.