Starshine's Pages - My Nook on the Word Wide Web

British Feminism Has A Transphobia Problem

I came out as Transgender back in 2017, I'm also British. I don't really like to make a big meal out of my trans identity, I don't like constantly talking about it, I don't hang pride flags on my bedroom wall and I've never attended a pride event. Not that I'm trying to disparage trans people who do do any of those things, I'm just personally not comfortable with it since I don't like drawing attention to myself. So while I haven't tried to hide the fact that I'm trans I also haven't publicised it much on this site. However sometimes it is neccassary to talk about these things and while this isn't the kind of thing I normaly talk about on this site , there are some things I want to get off my chest and perhaps rase awareness on some small scale if I can.

Living as a trans person in Britain I have become increasingly aware that not only British culture in general but more specificly British Feminism has something of a Transphobia problem. While in somewhere like America, the main source of transphobia is more likely to come from right-wingers and religious folk, I and many British trans people I see online have become far too used to otherwise progressive and left-leaning public figures "coming out" as Transphobic. It's gotten to the point where I personally pretty much assume that any British public figure doesn't consider me to be a "real woman" intil they have explicitly stated otherwise, which to put it lightly... is a major bummer.

This perticular brand of transphobe, unlike the usual right-wing kind, not only beleive that their tranphobia doesn't confilct with their progressive or feminist values, they often use said values to try and justify it. They believe that trans-rights activism is in direct opposition to feminism, that considering trans women to be women and allowing them into womens spaces, most notibly womens bathrooms, is dangerous to women. These perticular transphobes are often refered to by trans advocates as "TERFs" (an acronym for Trans Exclusionary Radical Feminist) and while I feel this label gives such people a little too much credit (I don't think there is anything "Radical" or indeed "Feminist" about trans exclusion) it is a useful label.

While at first glance it may seem like misguided but none the less genuine concern about potential problems further acceptance of trans people (or more specifically trans women) may cause for "biological women", on further inspection it becomes increasingly clear that its mearly run-of-the-mill transphobia in a seemingly feminist package. TERFs will use feminist and progressive sounding language and talking points to condemn trans women, using words like "male entitlement" to dismiss trans women who they see as "invading womens spaces". They see trans women as misogynistic men who dress themselves up as caricatures of women (probably as part of some sick sexual fetish) to assert their dominance over "real" women and molest or spy on underage girls. So because they see us as sexist men, they lump us in with men who consider women second-class citizens, want to take away their reproduction rights and even those who feel entitled to physically and sexually assult them. Just monstrous misogynists and predators worthy of the same righteous feminist wrath. Many of them will brand trans rights as a "mens rights movement", sometimes comparing trans people to "black face actors".

However, when you strip away the references to feminist theory, the actual arguments being made look no different to the same type of transphobia you'll hear from bible-thumping conservatives. They'll misgender us, make fun of our appearance, call us freaks, sexual deviants and predators. The assumption that trans women are just trying to deceave, that there has to be some kind of malicious intent behind it all is a classic transphobic stereotype. Like most transphobic scare-mongering narratives it also focuses almost soley on trans women, underplaying or outright ignoring the existence of trans men. When pushed on it, they will sometimes claim that trans men are "self-hating lesbians" that have been brainwashed by trans activists into "self-mutilation".

However, because TERFs appeal to the progressive cause of "womans rights", they are able to push harmful transphobic ideas a lot more succesfully in more seemingly progressive spaces while painting trans women as villans, which is very worrying. Transphobia in all it's forms isn't just offensive, it makes us less safe, sometimes costing lives. So when transphobia is coming from a "feminist" whos more likely to be sympathised with and taken seriously by progressives, it will cause even more damage and go further to alienating and demonising trans people. This form of transphobia is harder to spot and weaponizes a progressive cause to punch down at a vunlerable minority while convincing those susceptible that it's actually punching up. 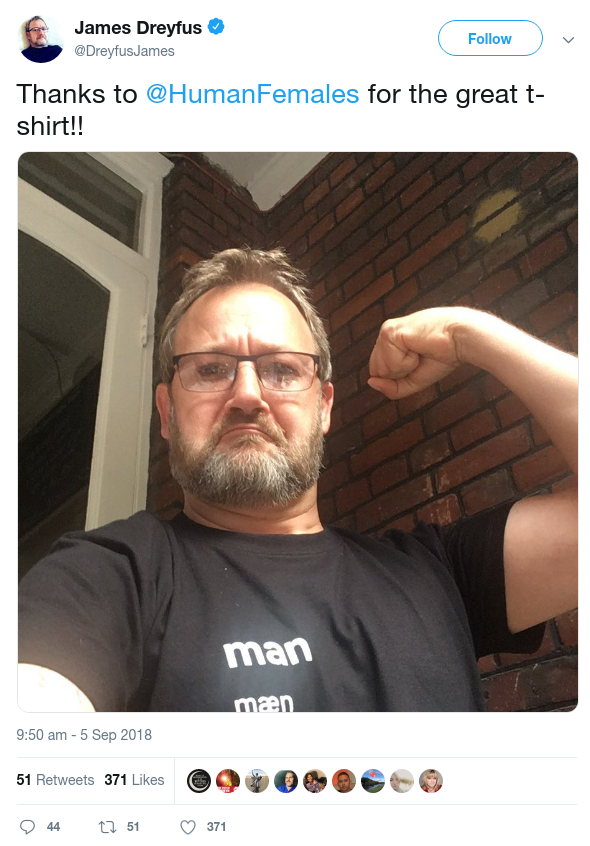 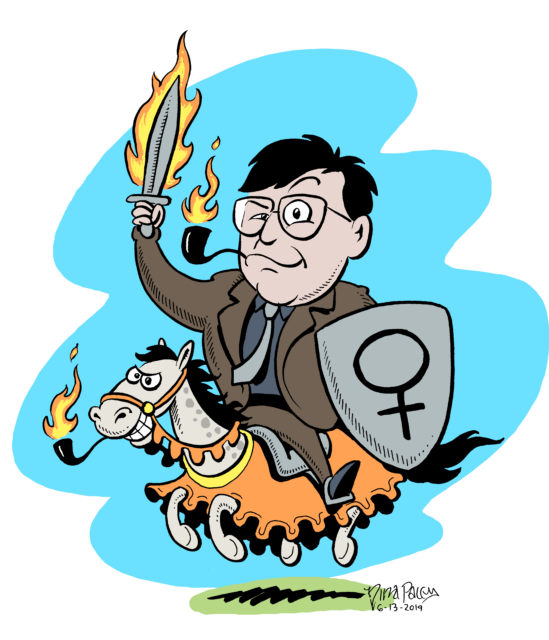 As you can imagine, this causes many trans people (myself included) a great deal of anxiety. To think that people who should be our allies not only trying to exclude us but lump us in with the same sexist bigots who would also do us harm, can cause us to feel alienated from feminism. However, the type of feminist that engages in this rhetoric, often turn out to be bigoted in other ways too. Germaine Greer is a feminist author who is a highly transphobic TERF, but has also enagaded in victim blaming rape victims, body shaming and (ironicaly) made sexist comments about other women. Another example: Graham Linehan ("Glinner" as he goes by on social media) is (was?) a comedy writer, most notable for Father Ted and The IT Crowd and is now infamous for his constant transphobic ranting on his Twitter feed. In 2008 he wrote a perticularly transphobic episode of the aforementioned The IT Crowd, which I watched when I was younger and it was one of many peaces of transphobic media that impacted my view of myself and acceptance of my own gender dysphoria, so thanks Graham. Graham recieved criticism on Twitter for this episode in 2013 and it was after this that his transphobic obsession seemed to grow worse. He harrassed and doxxed a trans woman and recieved a warning from the police. He also led a series of complaints from Mumsnet to the UK National Lottery for providing funding to Mermaids, a charity for trans children. This led leftist youtuber Hbomberguy to start a fundrasing stream of Donkey Kong 64, donating the money to Mermaids. He has also made derogatory remarks about Dolly Parton, saying she had a "fucked up" face (he seems to think this is a feminist thing to say, branding plastic surgery "mutilation", a phrase often used by bigots in reference to trans people). He has also talked down to a rape survivor for daring to stick up for trans people and has also shown a great deal of ignorance about cis women . He often seems to try to out-feminist women and in doing so actually engages in sexism, what a guy.

I don't know why this is so much more prevalent in the UK than the US, although theories have been offered, but its a problem that needs confronting. The second-wave feminism that TERFs mostly subscribe to falls short when compared to third-wave intersectional feminism that address the unique issues faced by women who aren't white, cis, heterosexual, able-bodied, etc. Trans exclusionary feminists would see trans women forced to use male spaces. Trans women are vulnerable and likely to experience violence (mostly from cis men) and forcing us into male spaces such as bathrooms is not only extremely alienating, but actually puts us in danger. The fact that this form of transphobia is so prevalent in the UK is very concerning. If you ever encounter this type of harmful mentality from people I urge you to challenge it (especially if you're a cis woman).

I decided to write this article because recently JK Rowling (Harry Potter author) recently came out in defense of a contractor who wasn't rehired for being transphobic and making co-workers uncomfortable. Rowling framed it as her being "forced out" of her job for "stating sex is real" and used some very dog-whistly language to address trans people. As a trans woman, I just want to say this: This is not a game of dress-up, I didn't wake up one morning and decide it would be fun to be a woman. This isn't some kind of sexual fetish or a way of gaining access to womens spaces for sick gratification. This isn't a way of tricking gay women or straight men into having sex with me. I have had gender dysphoria for as long as I can remember, living as a boy/man caused me deep depression. I deeply disliked having a male body, having to behave like, dress like and be refered to as a man. I am all too aware of the reality of my biology, but my womanhood isn't dependent on how closely my body resembles yours. Transphobia is the reason I'm afraid to leave the house let alone use womens bathrooms. It's the reason I can't shake the feeling that my being attracted to women makes me less of a woman myself. Trans people are tired of constantly having to justify our identity, especially to people who will never beleive us because they don't want to. There is nothing progressive about treating trans people like they're freaks who should be excluded from public life. I'm not someone who's identity begins and ends with a dress and a name, who will "sleep with anyone who will have me". But most importantly my existence isn't a threat to womens rights and you should be very weary of anyone who claims otherwise.